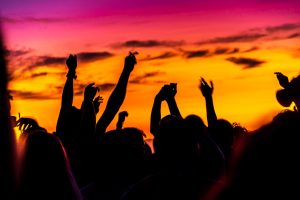 The Full Moon Party – arguably the world’s biggest repeat party, but does it live up to the hype?

This party is so successful that it’s repeated every single month of the year. So far it’s only been interrupted by the pandemic. Nothing else has touched it. Occasionally people complain about the noise and the excess and there have been attempts to curb it, but as yet nothing has stopped it.

The beginnings aren’t quite lost in the mists of time, but they do seem a bit sketchy. The accepted story is that it started as a one-off beach party back in the 80’s and it was held on the night of the full moon.

People liked it and it was held again on the next full moon.

Since then, it’s never really stopped. The original partygoers are now well into middle-age; it’s now the turn of their children to attend. Very soon the full moon party will be a generational thing. In time – and there’s no reason why this shouldn’t happen – it will celebrate its own centenary.

So just how good is it? And what’s it like to attend?

Since thousands of people go to each event, there’s no single verdict about – some love it so much they vow to return. Others get too carried away by it, and can be seen, white-faced, stumbling around the island for the next couple of days, just about coherent. A few will have major regrets that they attended.

The party starts towards the end of the afternoon and may be so lowkey that you wonder if you’ve made a mistake. You haven’t. As evening comes, so do more and more people. This is just the start. Speedboats will bring still more people and there may well be some 15,000 or more gathered by midnight. The party only tails off towards the morning. The die-hards may go on elsewhere to other parties once the sun comes up. Expect to see early morning chaotic scenes in town – people looking like they’re auditioning for a zombie film.

For most, it’ll be an unforgettable time. Think shoulder to shoulder bodies, everyone dancing, plenty of fun and conviviality. Big sound systems, lots of music, and the party happening all along the beach. It’s a massive, heady dose of fun.

What happens when things go wrong?

There are always police on hand to help – but if, say, your property has been stolen, there’s little that they can do, as there are literally thousands of suspects. If you’re feeling ill, there’s medical help on hand with a tent where you can go and chill out and be looked after. Some people report having their drinks spiked; others admit to taking drugs or simply imbibing too much alcohol. A few people may require psychiatric help if they have a bad trip. As with all very large parties, there are sometimes fights and assaults. There have been cases of sexual assault too. So it pays to be careful.

Perhaps one of the most common incidents is one you might not think of. You kick off your flip-flops on the sand, never to see them again – there are too many people and somehow you’ve drifted away from where you left them. Later, because you are shoeless, you step on broken glass and require medical help. This often happens – so take appropriate footwear and hang onto it.

The next bit goes without saying. Don’t let it apply to you. Drugs in Thailand are banned. If you are caught with them, you’ll be in big trouble. Even for a small amount. So don’t think about bringing drugs to the party – the police check motorcycles, cars and people coming to the party – and don’t buy any at the party. There are undercover police and there are dealers who will not just sell you the drug but report you to the police.

Don’t even accept a cigarette offered to you from a pack by a stranger. It might seem so innocent. Yet the cigarette may well contain some kind of drug and there may well be an undercover police officer there to catch you smoking it. None of this will equate to the fun time you expected to have.

Aim to get to the Full Moon Party in good time to find accommodation. It goes up in price nearer the party so you may want to stay somewhere a little further away. Staying in town may be fun, but be prepared to pay for the privilege.

If you’re coming from Samui, you can either go by public ferry to Koh Pha-ngan and then transfer by minibus to Haad Rin or take a boat over the evening of the full moon; there are lots of speedboats making the journey from Samui and they’ll bring you back too. Enquire at a travel agent’s for pricing.

Aim to have fun. Above all, aim for the experience to be a good one, that’ll make you want to come back again, another time.